Skip to content
The principles of Reflexology, the Meridians and quantum physics of the human bodythomasdougans2018-08-02T10:56:27+02:00
ENQUIRE NOW

The principles of Reflexology, the Meridians and quantum physics of the human body

The principles of Reflexology

Quantum physics of the human body

The principles of Reflexology

Reflexology is a gentle art, a fascinating ancient science and an extremely effective form of therapeutic foot massage that has carved an impressive niche in the field of complementary medicine. It is both a science and an art, a science because it is based on physiological and neurological study and an art because much depends on how skilfully the therapists apply their knowledge.

The feet are a microcosm of the body. All the organs, glands and body parts are represented by reflexes in similar arrangement on the feet. Their locations and relationships to each other on the feet follow a logical, anatomical pattern which closely resembles that of the body itself.

Pressure is applied to the reflex areas using specific thumb and finger techniques. This causes physiological changes to take place in the body as the body’s own healing potential is stimulated. As a general understanding, the science of Reflexology states that where there is sensitivity in a reflex area that would be an indication of stress or weakness in the corresponding organ or body part.

The goal of Reflexology is to trigger the return of homeostasis in the body, a state of equilibrium or balance. The most important step towards achieving this is to reduce tension and induce relaxation. Relaxation is the first step to normalisation and when the body is relaxed healing is possible. Blood vessels are not constricted, circulation is greatly enhanced and every cell in the body can be properly supplied with nutrients and oxygen. The body’s organs can function normally.

A skilled reflexology treatment may take almost 45 minutes to complete. The therapist stimulates all the reflexes in a treatment specific sequence, noting any sensitivity or pain. The treatment will also break down the congested molecules formed at the nerve endings (72,000 in each foot) and a healing process begins. 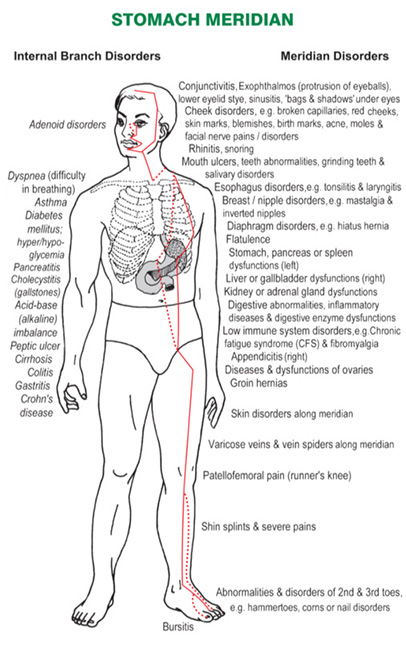 The Chinese discovered the meridian system approximately 3,000 years ago and the concept has gone from strength to strength to become a well-developed and researched science today.

The meridians are a network of energy channels or electrical pathways covering the body that are similar to the zones that are traditionally known in Reflexology. There are twelve major meridians, each passing through the one side of the body and having a mirror image on the other side.

A basic understanding of the meridians can help a therapist understand the disease pathways and assist them in pinpointing problem areas. The electric energy running through these meridians is known as Chi’. This energy is derived from the food we eat and the air we breathe, and is considered to be “the root of life”, the vital energy within the body that nourishes body and mind. A healthy diet, exercise, healthy breathing, good posture and limited stress will maximise Chi’ and ensure a healthy individual. A poor diet, lack of exercise, poor breathing, poor posture and high levels of stress will deplete Chi’, causing imbalances within the system that may ultimately result in disease.

When the meridians are running on a low current, evidence will be felt in the form of congestions along these pathways. These congestions are many of the diagnostic conditions that most people suffer from, such as sinus problems, breast lumps, constipation, headaches and knee pains. These are in fact one and the same problem, toxic molecules sticking together, obstructing the energy flow along the meridians.

A closer study of the meridians reveals that there are six main meridians found in the feet, specifically the toes, namely the meridians that penetrate the main organs; liver, spleen/pancreas, stomach, gall bladder, bladder and kidneys. A Reflexology treatment will therefore stimulate and clear congestions along all these meridians, allowing energy to flow freely and return the body to a state of balance.

Certain conditions on the feet such as bunions, plantar warts, corns, calluses and nail conditions should also be looked at as evidence confirming problems and congestions along the meridian in question. The therapist should be able to associate these problems to teach their patients about the underlying cause and encourage them to take responsibility for their lifestyle changes.

A disorder in the Stomach Meridian, for example, may cause upper toothache as this meridian passes through the upper gums. Lower toothache may be the result of a disorder of the large Intestine Meridian. The meridians can be used simply and effectively for a better understanding of a wide range of conditions affecting the body.

Quantum physics of the human body 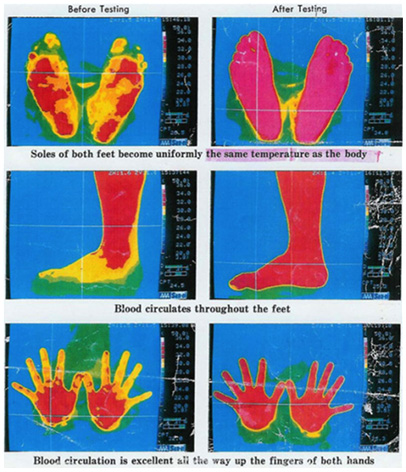 For centuries the human body has been regarded as a machine built of mechanical parts. If Sir Isaac Newton had been correct, then the deeper one delves into nature, the more mechanical or predictable things should become and behave.

Quantum physics recognises the interplay of numerous energetic forces that combine to form a whole. In this light the human being is basically a dynamic process and health is the harmony of energy in movement in response to the body’s internal and external environments. The above theory is true when examining the logical progression of the structural levels of organs, cells and molecules. Beyond the structural level of molecules, however, things become less mechanical and one now enters the world governed by probability, unpredictable action and energy.

For many years we have sought after professional advice to understand the science behind the colours in the feet that appear after a Vacuflex Concepts boot treatment. Again and again we have received the same answer from scientists and engineers alike – the colours display a thermal energy.

The ultimate source of thermal energy available to mankind is the sun that supplies the earth with the heat and light that are essential to life. Heat is thermal energy in transfer. At a basic level, thermal energy comes from the movement of atoms and molecules in matter. It is a form of kinetic energy produced from the random movements of those molecules and the thermal energy of a system can be increased or decreased.

Many years ago, photos of a pair of feet were taken with an infrared camera before and after a Reflexology treatment. The “before testing” and “after testing” images show clear evidence of an increase in circulation and thermal energy in the whole body. Blood circulation is improved all the way up the fingers of both hands until the entire body developed a uniform core temperature.